Our fourth finally arrived! She was almost a week late but luckily I convinced our doctor to induce me a bit early so we could begin her birth story and still have a couple days before Christmas. 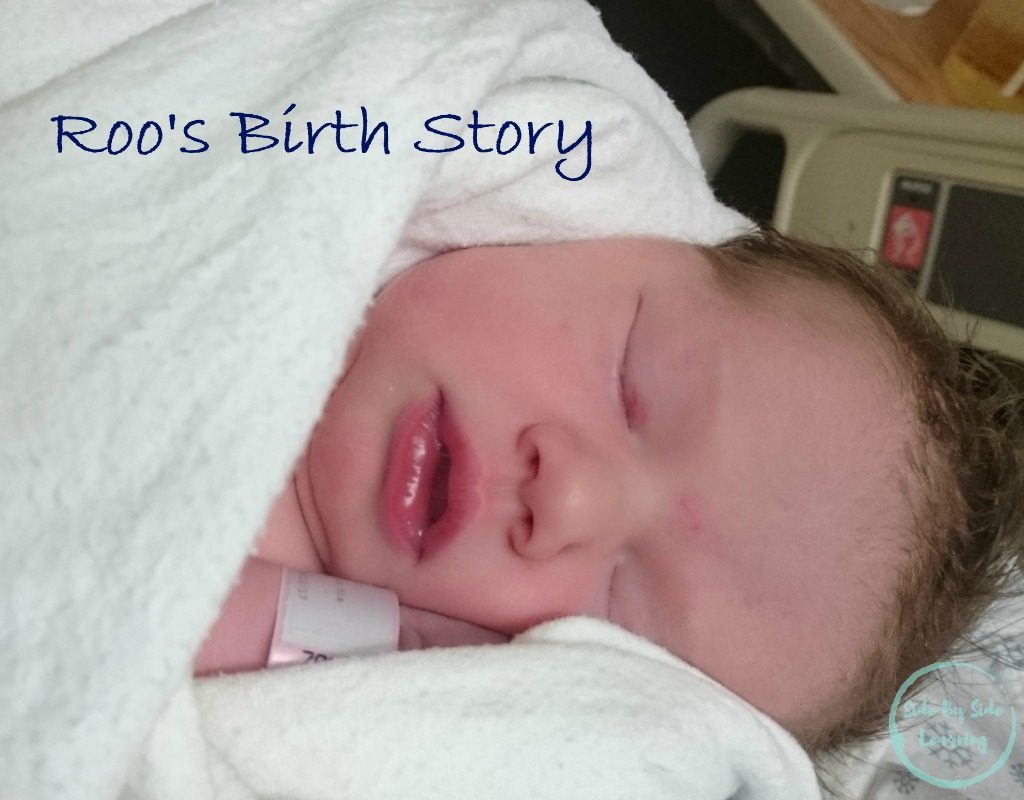 On Monday, December 18, there was a huge snow fall and I was convinced that our little one would come on her own and we would have to drive into town on the terrible roads or worse that I would deliver her on the highway. Eek! We were blessed though and she didn’t come in the middle of the night.

We went to the hospital on Tuesday early morning. After the plows were already out, which calmed a bit of my nerves. I still wasn’t looking forward to being induced but not being pregnant sounded lovely.

Once the contractions started to get closer together by body started to shake. It wasn’t painful or uncomfortable, just my bodies way of dealing with everything that was going on. The funny thing was that if I laid on either side then the shakes would immediately stop.

After a while I had my water broken. It was then we discovered that Roo has pooped in Utero. My thoughts quickly went to my younger brother. When he was born he had also pooped in utero but swallowed some and ended up in critical condition in the NICU for 48 hours. He turned out just fine so I wasn’t exactly worried but I was definitely a concerned about what the near future held in store for us. I was reassured that the NICU staff would be in the delivery room to attend to her immediate needs if there was a problem.

After being in active labor for about 2.5 hours my body kicked things into high gear. I dilated the last 2 inches ridiculously quick. I knew that it would be time for my little girl to arrive shortly and asked the nurse to call the doctor. They wanted to check that I was progressing which makes sense but I knew we needed to make that call asap. After they checked the nurses said that there wasn’t much time left and that the doctor might not make it in time.

Luckily the doctors happened to be at the hospital and poked their heads in just in time to throw on a gown. I had one big contraction that they wanted me to push at but I needed just a minute to prepare myself for a baby. (Obviously 9 months isn’t long enough…) Once I breathed through that contraction I was ready. Readyish. The next contraction I pushed and Roo was out! I have never gotten a baby out with one push before but that is the way to do it.

When Roo came out she had the cord wrapped around her neck and body. She wasn’t breathing. Surprisingly I wasn’t worried about her, I knew that everything would be okay. At that moment I knew that we would be able to handle whatever life threw at us. Soon she started breathing and the doctors checked her. Luckily she didn’t ingest any poop so she was able to stay with me. 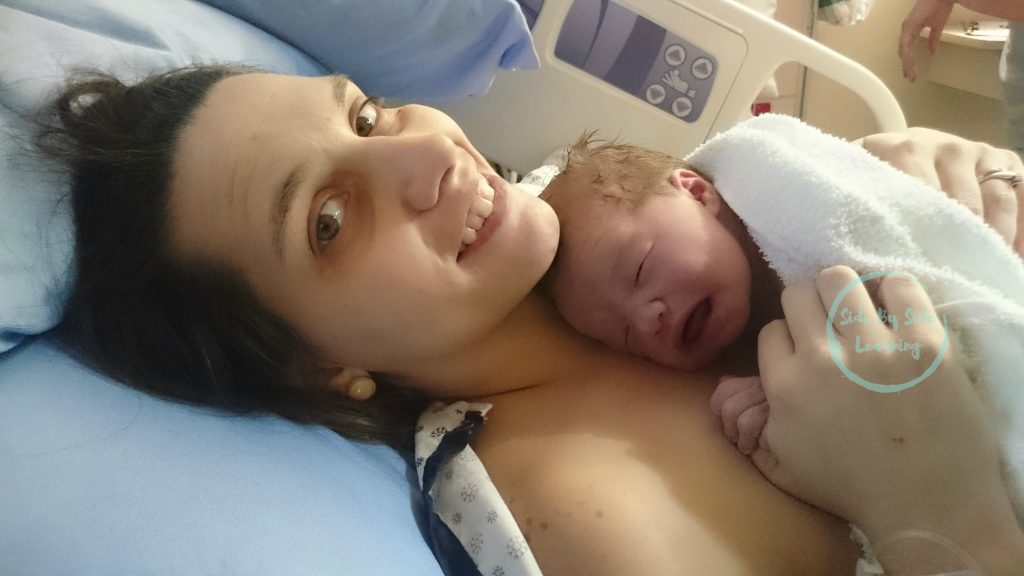 She was laid on my chest shortly after birth. As we were snuggling I felt something warm run down my body. My sweet new baby peed right on my torso. Pee everywhere. Awesome. After I got cleaned up, it was Roo’s turn. When we took her off my chest we saw that she had also pooped on me and our blankets. Seriously. I hope this trend doesn’t continue.

After all the excitement of the delivery room our hospital stay was unexciting. We had lots of family visit us but my favorite visitors were our three other kids. They were so sweet when they met Roo. Lots of hugs, kisses and excitement. Each child reacted differently but each interaction was a treasure. 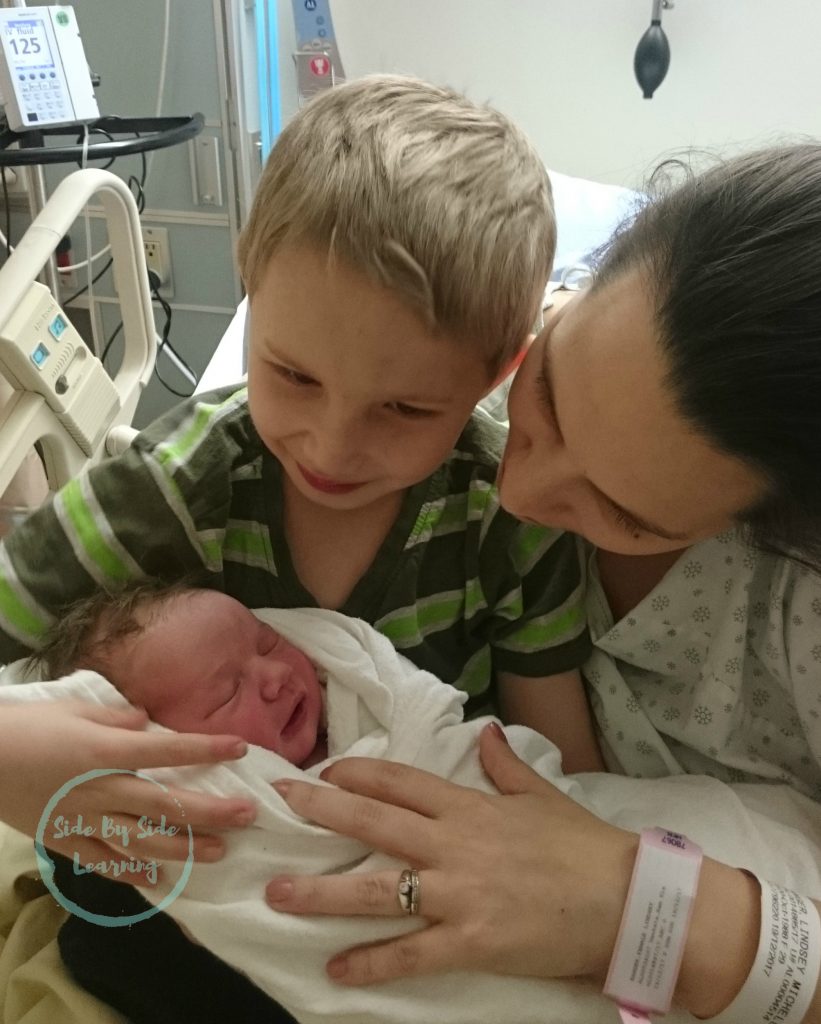 Bee was so excited when his grandparents told him that the baby had arrived. He saw her picture and proceeded to the door to come and see her. I loved his enthusiasm. When he got to the hospital he couldn’t wait to hold her. He would tell me that he was going to protect her and help her to be happy. He is an incredible big brother and I know he will do his best to love Roo and help her as she grows up. We had Bee draw in his journal and write about the babies arrival. He did awesome but the best was when my husband asked him if we should keep Roo forever. Bee’s reply was that we should just keep her until she grows up. He is so wise for being barely five. 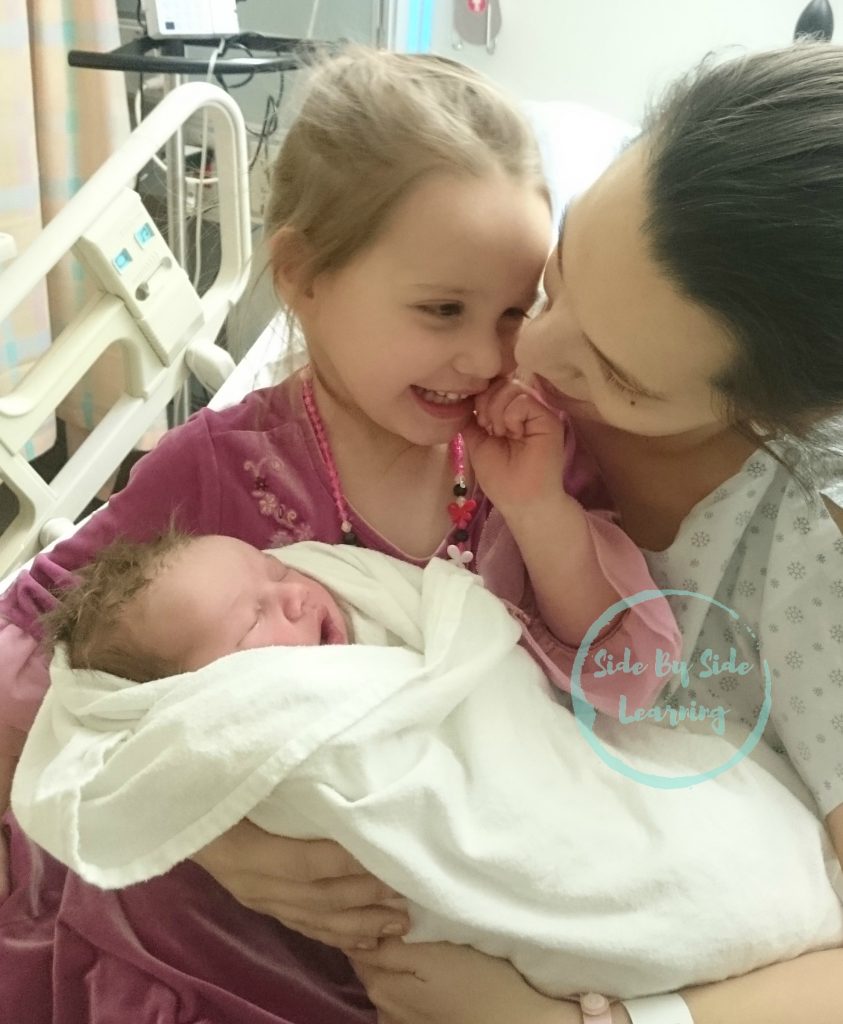 Sweets has been patiently waiting for the arrival of her sister. She has a plan for all the fun they will have together. Unfortunately, most of the fun sister stuff is going to have to wait at least a year or two. When Sweets got her turn to hold the baby she didn’t want to let go. She kept telling us that she wasn’t done yet. I bet she would have held her for hours. She was slightly devastated that we didn’t name the baby Ariel but I think she has gotten over that now. 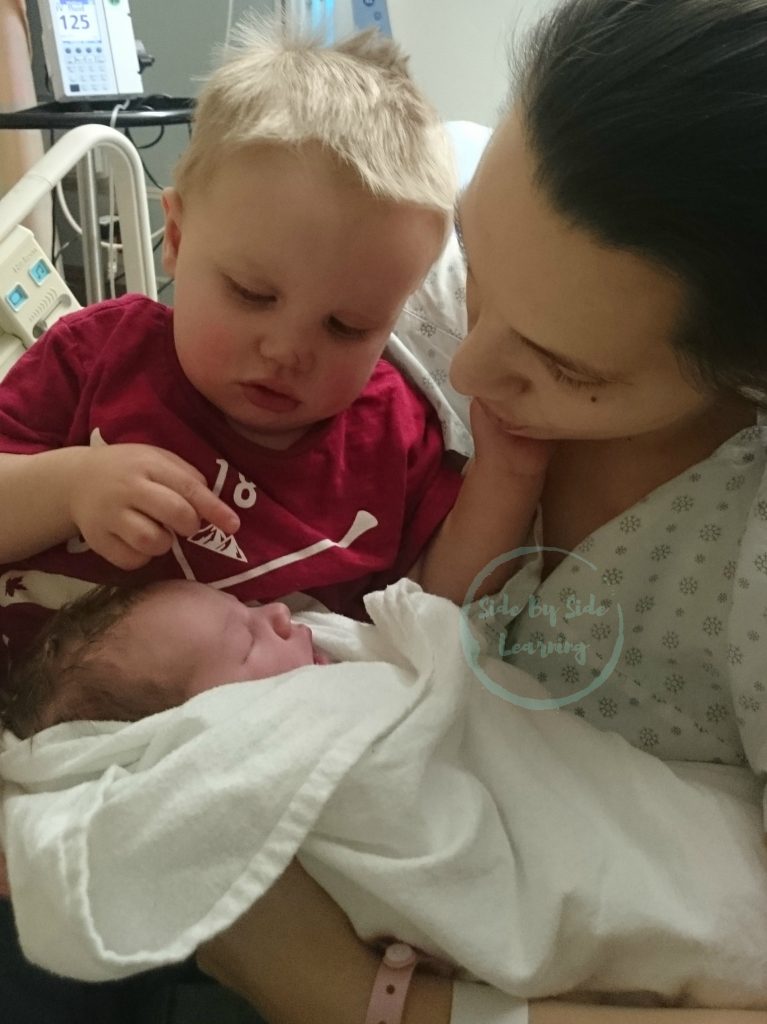 Tiger, my rough and tumble boy. He was the biggest shocker of all. I thought for sure he would be poking her eyes out, hitting and over all just not being gentle. He was so good with her! He smiled at her constantly. Pointed out her eyes, nose, mouth and ears to me. He watched her quite intently and gave her the gentlest kisses. Tiger is only 19 months older than Roo, I am hoping that as they grow up they become amazing friends. They were so sweet together.

Motherhood is kinda a funny thing. One day Tiger was my baby, my little guy. The next day he grew up. Suddenly he was huge! I saw more and more of his abilities and he became a toddler. Of course its wonderful but the change happens so suddenly that its kind of a whirl wind. One change that I am just not sure how you can possibly prepare yourself for. 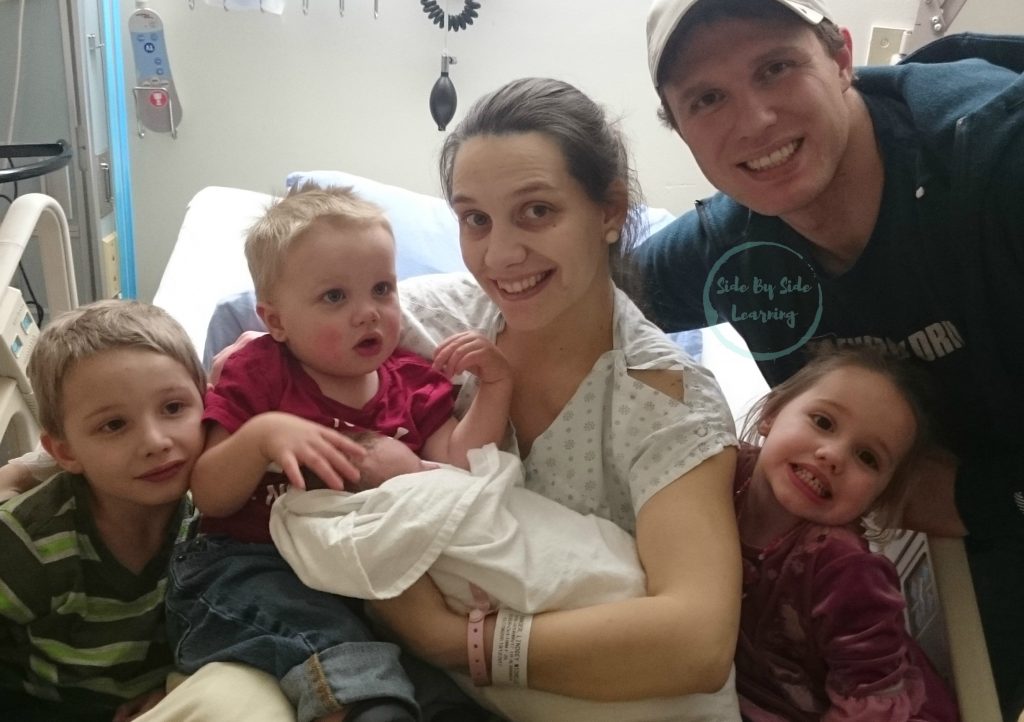 Back to Real life

We only stayed at the hospital for 24 hours once Roo was born. A quick stay but I was happy to be headed home to my own bed.

My inlaws were amazing and kept the three kids for one more night so that I could get some nice rest before our hooligans returned. Three nights is along time for this Mom to not see her kiddos but I really appreciated the time I had to bond with Roo and to catch some extra z’s.

The next morning when the kids returned they were so excited to see Roo and myself. It made my heart explode a little bit. I can’t believe that we are blessed to have four amazing kids while at the same time I have no idea how I am going to survive four kids. Good thing I have an amazing co-captain in my husband.

Together we can do anything. Even raise four human beings.

To read more of my birth stories follow this link.

These foam pumpkins are going on three Halloween s

It's my birthday and since I can't think of anythi

Free As A Bird brought up many discussion points f